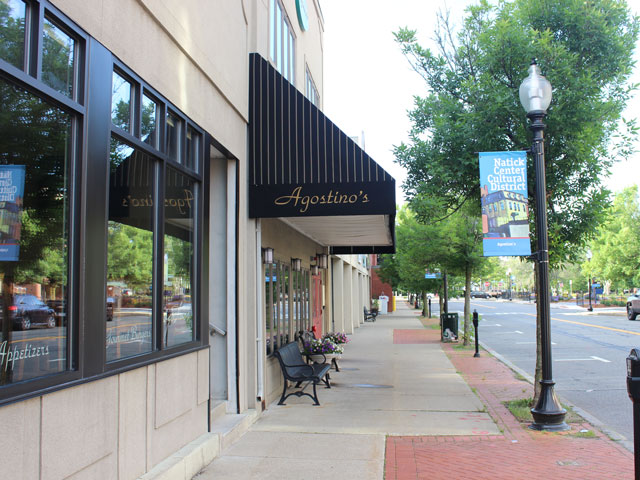 A staple of the downtown community for a few decades, Agostino's recently changed ownership. And while the decor looks a bit different, the food quality is (mostly) the same.

Note: Agostino's makes our list of the best things to do in Natick.

If you're in the mood for some toasted ravioli, head to Agostino's. Their marinara sauce is terrific to dip the well-constructed ravioli into, especially over a reasonably priced (and poured) glass of white wine. Like the garden salad, most entrees come with a choice of pasta/potato/veggie with some mixing and matching available. My go to is ziti and broccoli, though I can be (easily) convinced into the toasted ravioli upcharge.

Like every italian restaurant, Agostino's comes action-packed with meatballs, salami, prosciutto, and provolone laden antipasto, and a heavy hand with the mozzarella cheese. Most entrees come with a garden salad, yes, the lettuce is crispy). And, it wouldn't be a trip to Agostino's without their fresh, soft seeded bread. Don't go to the restaurant expecting olive oil with your bread though, it is strictly a butter-only operation.

The rest of the menu contains all of the usual suspects, arancini, bruschetta, mussels in a white wine and fresh tomato sauce, caesar salad, chicken piccata, lasagna with meat sauce, clams, seafood cannelloni with ricotta in an alfredo sauce. Also, some steaks, burgers, fish (swordfish, salmon, etc.), and a selection of 6 different parmagiana options.

Like many restaurants these days, Agostino's keeps a fresh supply of domestic and imported bottle beer in the bar fridge, while reserving 4 taps for local craft beer, including perennial Massachusetts favorites including Sam Adams and Cisco Brewers, as well as smaller craft breweries like Lord Hobo (Woburn/Cambridge).

The wine supply is admirable for a restaurant of its size, serving an array of white and red varietals. And, there's a full supply of liquor, for those looking for a classy cocktail to go with their fine dining. The bar has seating for 12, while the upstairs itself can comfortably seat 2-3 times that.

If you're stopping in at lunch, which we highly recommend you do, be sure to saddle up to the bar and count the amount of drivers who observe the California Roll when gliding through the Stop signs at the South Ave / Washington 4-way stop. We think you'd be amazed at the results.

You can even buy an Agostino's t-shirt for $20.

For starters, it is walkable from the train (Natick Center station). Improvements to the bar, changed decorations, and a weekly trivia night (were they always doing that?) have certainly altered what used to be one of the coziest restaurants around. Is it enough not to patronize the business? Hardly.

The bar/lounge area has been around for a decade plus. Decent vibe. You can't go wrong eating up there.

Something feels different though. Let's just chalk it up to nostalgia.

Speaking of trivia, Wise Guys Trivia hosts a Monday night affair at 6:30pm. And, they have started (?) doing live music. So there's that.

What to order: The Chicken Parmesan

Every restaurant has a signature dish. For Agostino's I'd have to say it is the Chicken Parmigiana. Long before the sale, and hopefully longer after too, will Agostino's chicken parm remain top of mind when it's time to go out for italian. It's gotta be the sauce. Some may argue La Cantina in Framingham is superior, but we just don't buy it.

We imagine the eggplant parmesan is fairly good too, we just never make it past the chicken. The portions are more than respectable with the chicken parm.

What not to order: Pizza

Why? Because they took out the pizza oven after the recent flood/change of ownership. No more pepperoni! No more italian sausage pizza!

This didn't sit well with the locals ... so we hear.

When you consider all of the food options in Natick, it is no surprise that the restaurant isn't top of mind when it comes to lunch. But don't discount lunch, the parmesan sandwiches are a delight.

All of the hits. Calamari, toasted ravioli, mozzarella sticks, and more. A few years ago, Agostino's caught up with the times and added on to their appetizer menu with more traditional sports bar sides like buffalo wings.

Yes, they offer takeout. It's debatable what they are more famous for, dining-in or their strong takeout service. Last we recall, you could order tomato sauce in bulk to go. Now that is how it's done.

Yes, they cater. Nothing sounds better than a full pan of parm.

All in all, Agostino's really nails the sweet spot of quality, quantity, and price. It's a step up on Comella's and Lola's as a full-fledged ristorante, without breaking into the wallet-crushing exasperation that dining out in Wellesley is (or Pizza Peddler, for that matter). If you are looking for an alternative, give Ziti's a try in West Natick.

Hopefully the restaurant continues to thrive in the location it has inhabited for decades. Parking can be a bit tight, with The Dolphin, Eli's, and Dah-Mee all vying for the same spots, but the town lot is still located behind the police station on Clarendon Street. There used to be a parking lot directly behind the restaurant, but it seems off-limits now. That is really unfortunate.

A perfect spot for date night, where an appetizer, two entrees, and a bottle of wine will come in under $100.